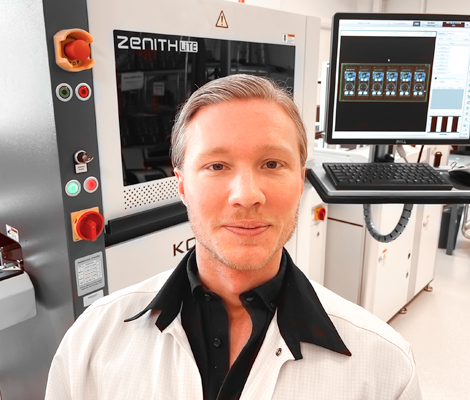 Since April, Inission Stockholm has had a new production manager. His name is Richard Strandman and most recently he worked as production manager at Enics. Richard has for most of his career worked in the manufacturing industry and in several different roles. With his drive and interest in improvement work, he hopes to be able to contribute to Inission Stockholm’s continued development.

Richard grew up in Västerås and started working at an early age. He started as an assembler and then went on to become warehouse manager at the same company.

– After three years as warehouse manager, I got the chance to test the role of production manager with responsibility for about 80-90 employees. As a production manager, I became involved in improvement projects and through ”Produktionslyftet” I came in contact with LEAN. Since then, I have prioritized projects to maximize customer value.

– I like responsibility, being in control, being able to influence and contribute. That’s what has driven me. Not the titles themselves. Having been able to work in marketing, technology and production has been a useful experience.

For Richard, it is important that the businesses he works in are profitable, that functions are developed and that quality is ensured.

– To be successful, we need clear and competent leaders who can steer the business towards the goals set. Cooperation must permeate the entire business. With that in mind, it is extra interesting that Inission already has a well-developed business system in the form of Inspirit, which is based on LEAN, principles and values.

What are your first impressions of Inission?
– I like that it is an entrepreneurial company. Ideas and suggestions for improvement are encouraged and there is potential to develop the business. I have good contact with my employees and we have a management that wants to move forward.

What are your best qualities?
– I am a positive team player with the attitude that everything can be solved. I want to move forward, am willing to take risks and I never give up.

What does a day at Inission look like for you?
– The day begins with management meetings to set the pace and get an overview of today’s deliveries. The remaining time is spent on, among other things, improvement projects and strategy work.

About Inission
Inission is a profitable total supplier that offers demanding industrial customers in the Nordic region complete electronic and mechanical products of the highest quality. Our services cover the entire product life cycle, from development and design to industrialization, volume production and aftermarket. By combining this with logistics services and a production based on high flexibility, customer adaptation and short lead times, our offer becomes competitive. Inission has production units in Stockholm, Västerås, Borås, Munkfors, Malmö, Trondheim (Norway), Lohja (Finland), Lagedi and Tallinn (Estonia). Inission is listed on OMX Nasdaq First North.