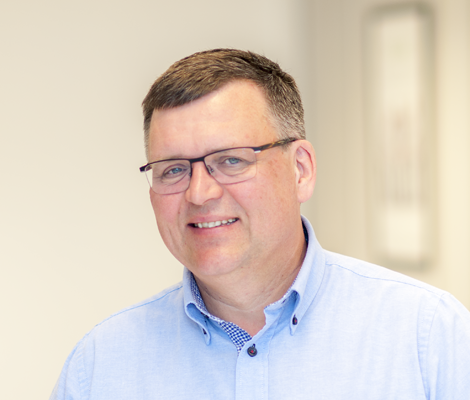 Stefan Henriksson is Inission Munkfors new Sales Manager since mid-April. Stefans latest job was at the german company AEMtec GmbH where he was employed to find new customers as well as contribute with his technical expertise in new projects. Now he is looking forward to strengthening and developing Inission Munkfors market department.

Stefan grew up in Eastern Ämtervik, outside of Sunne in the middle of Värmland, where he early on discovered an interest in technology. During high school he studied a four-year technical line followed by a year in the army’s technical school, focusing on electronics, hydralics and mechanics.

– It sounded exciting. The Army wanted technical skills for their weapon systems and that’s when I learned all about the fire control system in a Haubits artillery piece. It also became the gateway to my first job at Bofors in Karlskoga where I was involved in the development of weapon systems.

Stefan stayed at Bofors for seven years and during the last three years he also read electronics / data at Örebro University. Then he moved home to Sunne where Stefan started working on Trienta Electronics as Deputy Production Manager and in charge of the Test Department.

– I stayed there for six years until I once again ended up in the defense industry. As a consultant for Cap Gemini / Sogeti, I spent six years real-time programming weapon systems for SAAB Dynamics.

Focusing on customers and sales
In addition to his technical know-how, Stefan has always had a focus on customers and sales. He has been the technically skilled at customer visits and has always assisted the marketing departments in technical matters. But the focus on sales grew seriously with his next role as Vice Production Manager at NOTE, where he also was project manager in technical customer projects. Over time, he became more and more involved in customer responsibility.

– I would like to say that my technical background is my biggest strength in my role as Sales Manager. Knowing how a product is built and working makes it easier for me to make a good deal. Customers also feel more confident when they know that they quickly can get answers.

Prior to joining Inission, Stefan worked at AEMtec GmbH, a company focused on engineering services and skilled in microelectronics (non-capped circuits such as hearing aids electronics). There, his role became even more focused on customers when, as a Business Development Manager, he became responsible for the Nordic market and England.

Why was Inission interesting to you?
– There were several reasons such as that I now, as stationed at the Inission Munkfors factory, get close to production. I do not need to book a flight to visit the factory. Now I can take a look at the products and its development from morning to evening. Besides that I think it’s special to sell something that is produced in Sweden. I also have a lot of experiences that will be well suited at Inission.

Lastly, what do you have for the interests of the side of the job?
– I like spending time with my family at the family farm in Östra Ämtervik. I also like doing things outdoors – hunting, fishing, taking care of the forest and the farm. I also like alpine skiing. My children have competed a lot so I have probably seen all of Sweden’s ski resorts at this point.

We at Inission welcome you and wish you good luck!